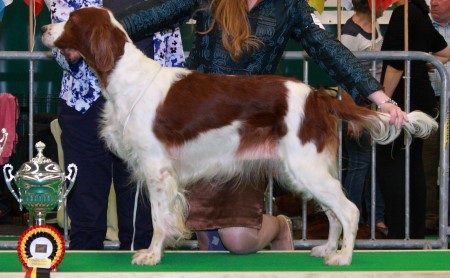 ORIGIN : Ireland.
DATE OF PUBLICATION OF THE ORIGINAL VALID
STANDARD : 19.04.2005.
UTILIZATION : Most acceptable companion and friend in the homes and the fields. The Irish Red & White Setter is bred primarily for the field. The standard as set out hereunder must be interpreted chiefly from this point of view and all Judges at bench shows must judge the exhibits chiefly from the working standpoint.
CLASSIFICATION F.C.I. : Group 7 Pointing Dogs
Section 2 British and Irish Pointers and Setters.
With Working Trial.
BRIEF HISTORICAL SUMMARY : The Irish Setter probably came to its own at the end of the 17th century. It is not well known outside of Ireland that there are two breeds of Irish Setters, but is fairly certain, that the Red and White Setter is the older of the two, and that judicious selective breeding evolved the solid red colour.
When Irish Setters came to the show benches, just past the middle of the 19th century, there was a good deal of confusion about their proper colour. By the end of the 19th century, the Red Setter had virtually eclipsed the Red and White, which became so rare, that they were thought to be extinct. During the 1920s, efforts were made to revive the breed. By 1944, the breed had re-established itself well enough to have a club of its own, and today it can be seen in healthy numbers at Irish shows and Field Trials. The present Club the Irish
Red & White Setter Field & Show Society was formed in 1981 and through its endeavours and direction the breed is now well established nationally and internationally. The Irish Red & White Setter competes successfully in Field Trials against the other pointing breeds and there are now quite a number of Field Trial Champions and Show Champions.

GENERAL APPEARANCE : Strong well balanced and proportioned without lumber; athletic rather than racy. The Irish Red & White Setter is bred primarily for the field and must be judged chiefly from the working standpoint.
BEHAVIOUR / TEMPERAMENT : Aristocratic, keen and intelligent. Displays a kindly, friendly attitude, behind which should be discernible determination, courage and high spirit. The Red and White Setter is very friendly, dependable and easily trained gundog.
HEAD : Broad in proportion to the body.
CRANIAL REGION :
Skull : Domed without showing occipital protuberance, as in the Irish Red Setter.
Stop : Good Stop.
FACIAL REGION :
Muzzle : Clean and square.
Jaws : Jaws of equal or nearly equal length.
Teeth : Regular teeth; scissor bite ideal; edge to edge bite acceptable.
Eyes : Dark hazel or dark brown; oval, with slight prominence and without haw.
Ears : Set level with the eyes, and well back, lying close to the head.
NECK : Moderately long, very muscular, but not too thick, slightly arched, free from all tendency to throatiness.
BODY : Strong and muscular.
Back : To be strong and well muscled.
Chest : Deep, with well sprung ribs.
TAIL : Moderate length, not reaching below hock, strong at root.
Tapering to fine point; no appearance of ropiness and carried level with or below the back.
LIMBS : Well muscled and sinewy; strong bone.
FOREQUARTERS :
Shoulders : Well laid back.
Elbows : Free, turning neither in nor out.
Forelegs : Straight and sinewy, well boned.
Pastern : Strong.
HINDQUARTERS : Wide and strong; hind legs from hip to hock long and muscular.
Stifle : Well bent.
Hock : Well let down, turning neither in nor out. From hock to foot of moderate length and strong.
FEET : Close-knit with plenty of feathering between toes.
GAIT : When moving at the trot long striding, very lively, graceful and efficient. Head held high, hindquarters drive smoothly and with great power. Forelegs reach well ahead and remain low. Seen from or rear forelegs and hindlegs below the hock joint moving perpendicularly to the ground, no crossing or weaving of legs, front or back.
COAT
HAIR : Long silky fine hair called "Feathering" on the back of the fore and hind legs and on the outer ear flap, also a reasonable amount on the flank extending on to the chest and throat forming a fringe. All feathering straight, flat and free from curl but slight wave is permissible. The tail should be well feathered. On all other parts of the body the hair should be short, flat and free from curl.
COLOUR : Base colour white with solid red patches (clear islands of red colour), both colours should show the maximum of life and bloom; flecking but not roaning permitted around the face and feet and up the foreleg as far as the elbow and up the hindleg as far as the hock. Roaning, flecking and mottling on any other part of the body is objectionable.

SIZE AND WEIGHT :
Desirable Height at the withers : Dogs : 24,5 - 26 ins. (62 - 66 cm).
Bitches : 22,5 - 24 ins. (57 - 61 cm).
FAULTS : Any departure from the foregoing points should be considered a fault and the seriousness with which the fault should be regarded should be in exact proportion to its degree.
SEVERE FAULT :
• Any dog or bitch not conforming to the height standard.
ELIMINATING FAULTS :
• Aggressive or overly shy.
• Males not having two apparently normal testicles.
• Although flecking but not roaning is permitted around the face and feet and up the forelegs as far as the elbow and up the hindleg as far as the hock, visible and excessive roaning, flecking and mottling on any other part of the body is an eliminating fault. Any dog clearly showing physical or behavioural abnormalities shall be disqualified.
N.B. : Male animals should have two apparently normal testicles fully
descended into the scrotum.