From 1977, the ISC was looking for a site that was found in Wommelgem, Ternessenlei, initially to give the "G & G" lessons. As we hired the site annually, and sooner or later the site would be parceled, we eagerly looked for another location.
When the government of Wommelgem became the owner of Fort II and this was made ​​available to clubs, we were lucky that 1.5 ha was offered to us. With the start of the work on November 3, 1979 and hard work of willing members, we could inaugurate our new clubhouse and clubground officially on September 21, 1980.
Meanwhile, the site remains a beautiful meeting place for our members and their dogs. Not only the "G & G" classes continue on this site but also other activities such as St Patrick's Day, Summer Festival, Saint-Hubert Celebration, Youngdogday, etc. occur.

Coming from Brussels:E19 direction Antwerpen -> Craeybeckx tunnel direction to the Netherlands -> E313 Hasselt/Liège -> exit Mortsel/Wommelgem -> turn right on traffic lights towards Mortsel -> turn left on the second traffic lights (Herentalsebaan) -> 2nd street on the left (Fort 2 straat) after 400m you will find on your right hand side the footballground and parking -> follow the signs to the ISC. 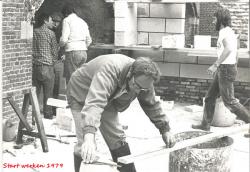